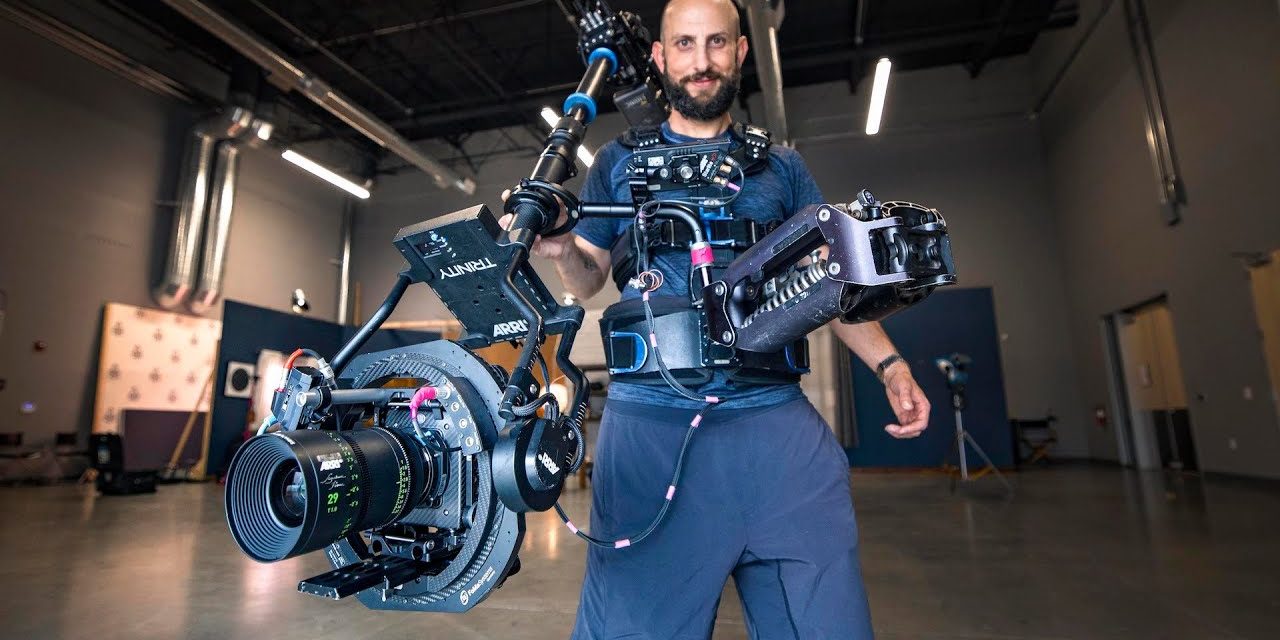 The modular ARRI TRINITY stabilizer combines classic mechanical stabilization with advanced active electronic stabilization via 32-bit ARM-based gimbal technology. The result is a 5-axis stabilizer which offers fluid, precise movements to permit new creative options for the director and DP. The fluidity is particularly noticeable when shifting from low to high shots and vice versa. A high to low move is sometimes called a drop down. Unrestricted movement and the option to lock the stabilizer into a traditional mode mean you need only one gimbal for all your needs.

The TRINITY will accommodate larger camera or lens payloads (up to 66 lb) yet also offers a compact form when configured with the ARRI ALEXA Mini. Full-size digital cameras such as the ARRI ALEXA SXT are easily accommodated.

Use the TRINITY as a 5-axis rig or upgrade existing stabilizers using a 2-axis head upgrade option. The stabilizer is designed and made in Germany to the highest quality standards.

Gimbal Operation
Simply invert the post to shift from low to high during a shot with uniform movement. A joystick control provides the option to look up or down during this motion as well. This delivers a seamless shot from a low angle to an over the shoulder POV. It also allows the operator to generate a transition around corners in low or high mode then a smooth shift to the alternate view.

These new movements are available when operating the TRINITY in fully stabilized mode. Need a classic stabilizer? Simply set TRINITY to a locked mode where the tilt axis is connected directly to the post in the traditional manner.

Peer around corners by setting the post at 45-degrees and twisting it left or right. This can be accomplished either in low or high mode.

Additional stabilization within the roll axis permits the use of telephoto lenses.

If you need a more traditional operating style, you can lock the TRINITY in position in which the tilt axis is connected to the post in a traditional manner.

Gimbal Balancing
Balancing the ARRI TRINITY stabilizer takes no longer than a regular balance procedure, provided you have a symmetrical camera setup.

The ARRI artemis Joystick / Monitor Mount with V-Mount battery mount and docking bracket fits the ARRI TRINITY hybrid stabilizer rig and allows an on-board monitor. It offers thumb control for the tilt access of the TRINITY.

The TRINITY 5-axis gimbal may steal the limelight yet the ARRI artemis Joystick holds its own. Check out the moves you can achieve by watching the NAB 2016 video provided for your reference.

The rugged Transvideo StarliteHD5-ARRI 5″ OLED Monitor with ARRI bus interface and integrated H.264 Recorder supports ARRI camera control via a touch interface. It includes SDI cable and power/communication cable to connect the monitor via EXT connector on either the ARRI ALEXA Mini or the ARRI AMIRA cameras which are available separately.

Constructed of aviation-grade aluminum, this 5″ monitor is the size of a smart phone and weighs less than 0.44 lb (200 g). Use on a rig on camera support rod to record and monitor while shooting.

This monitor/recorder was co-developed by Transvideo and ARRI to merge their functionality. It pairs well with the ARRI TRINITY Rig and the ARRI artemis Joystick.

You can use the ARRI TRINITY as a stand-alone, handheld frame gimbal, without the artemis and other accessories. Set includes an external power cable to facilitate this.

Designed specifically to pair with the TRINITY, this 6-pin control cable includes Lemo 1B 306 to 0B 305 and offers hot swap capabilities.

NOTE: Batteries are not included in this set.

This docking bracket for the artemis system includes a 2.5″ wide docking ring for the 1.8″ post.

This website uses cookies to improve your experience while you navigate through the website. Out of these, the cookies that are categorized as necessary are stored on your browser as they are essential for the working of basic functionalities of the website. We also use third-party cookies that help us analyze and understand how you use this website. These cookies will be stored in your browser only with your consent. You also have the option to opt-out of these cookies. But opting out of some of these cookies may affect your browsing experience.
Necessary Sempre abilitato
Necessary cookies are absolutely essential for the website to function properly. These cookies ensure basic functionalities and security features of the website, anonymously.
Functional
Functional cookies help to perform certain functionalities like sharing the content of the website on social media platforms, collect feedbacks, and other third-party features.
Performance
Performance cookies are used to understand and analyze the key performance indexes of the website which helps in delivering a better user experience for the visitors.
Analytics
Analytical cookies are used to understand how visitors interact with the website. These cookies help provide information on metrics the number of visitors, bounce rate, traffic source, etc.
Advertisement
Advertisement cookies are used to provide visitors with relevant ads and marketing campaigns. These cookies track visitors across websites and collect information to provide customized ads.
Others
Other uncategorized cookies are those that are being analyzed and have not been classified into a category as yet.
ACCETTA E SALVA